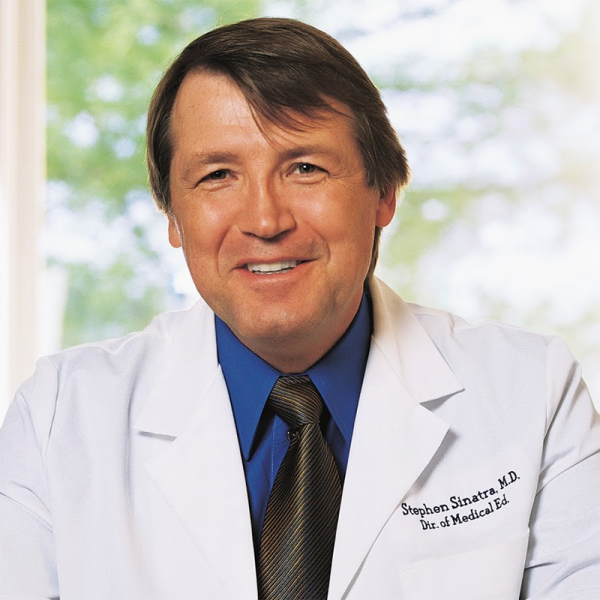 Dr. Sinatra is a board-certified cardiologist, certified bioenergetic psychotherapist, and Certified Nutrition Specialist. He has lectured and facilitated workshops worldwide and has authored several publications and medical periodicals.

Since opening his own private practice in Manchester, CT in 1977, Dr. Sinatra has become well-known for his integration of conventional medicine with complementary nutritional and psychological therapies that help heal the heart. He is a fellow in the American College of Cardiology and the American College of Nutrition, and served two four-year terms as the Chief of Cardiology at Manchester Memorial Hospital, where he had previously been Director of Medical Education for 18 years.

After a ten-year study of bioenergetic psychotherapy, Dr. Sinatra began co-facilitating psychotherapy workshops for his patients and gathering data with before-and-after blood pressure measurements and urine samples to measure stress hormones. As another early hallmark of his practice, he began using coenzyme Q10 (CoQ10) to help treat a wide range of cardiac concerns several years before the conventional medical world would embrace this nutrient. It was during this time that Dr. Sinatra saw first-hand the important contribution that the supplemental use of energy-supplying nutrients, especially CoQ10, made in the lives of his patients.

As adjunct faculty at the University of Connecticut (Assistant Clinical Professor of Medicine) and a member of the Dean’s Council at his alma mater, Albany Medical School, Dr. Sinatra has sponsored collaborative efforts for medical students to take a summer course in natural or alternative medicine at Bastyr University (Kirkland, WA), where he is a contributing lecturer.