Recent discoveries have identifed a class of lipid mediators, identifed in circulation and tissues throughout the body,1,2 known as specialized pro-resolving mediators, which function as ”resolution agonists” and actively coordinate the resolution of infammation.1-3
However, some individuals exhibit insufficient levels of endogenous specialized pro-resolving mediators—thought to be related to lifestyle behaviors, dietary choices, age, or negative health conditions—in response to an inflammatory challenge.1-3 As a result, the resolution activities can be negatively impacted, leading to an unresolved chronic inflammatory response.

Internal Conversion from EPA and DHA

Initiation Phase Is Needed for Resolution of Inflammation

Each phase of the inflammatory response is linked, and the initiation phase is required for the resolution phase to occur.5,6 Interestingly, the use of certain traditional anti-inflammatory therapies such as NSAIDs are considered “resolution disrupters.”1 They block the initiation phase activities by inhibiting the biosynthesis of eicosanoids involved in inflammation initiation, thereby impacting the subsequent production of specialized pro-resolving mediators needed for inflammation resolution (Figure 1).1

Early scientific doctrine believed that after an inflammatory response was initiated, pro-inflammatory signals dissipated over time and inflammation passively faded out with an eventual return to homeostasis.2 However, it is now understood that an inflammatory response has an initiation phase and a resolution phase, and resolution of inflammation is an active and controlled process.2-4 Without effective resolution, a return to homeostasis will not occur. Specialized pro-resolving mediators, including resolvins (Rvs), protectins (PDs), and maresins (Mars), are the orchestrators behind this active resolution process by:2-4
•    Limiting excessive neutrophil infiltration in affected tissue
•    Stimulating macrophage phagocytosis to clear cellular debris
•    Decreasing pro-inflammatory mediator production
•    Enhancing tissue regeneration and restoring to homeostasis 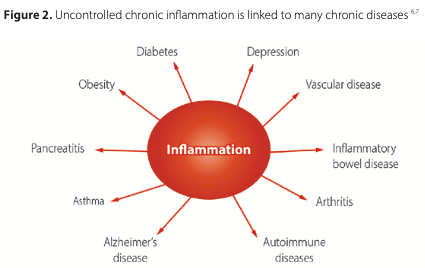 Preliminary evidence from in vitro, in vivo (animal), and ex vivo experiments support the role specialized pro-resolving mediators may be having in inflammation resolution. In theory, nutritional strategies that enhance production of specialized pro-resolving mediators may be beneficial in the management of health conditions associated with chronic unresolved inflammation. Some scenarios are discussed below.
Osteoarthritis (OA) OA is characterized by an increase in inflammatory cells and biomarkers in affected joints.8
•    In patients with arthritis, lower levels of Rvs, 17-HDHA, and 18-HEPE were correlated with higher erythrocyte sedimentation rate and pain.9
•    In animal models, treatment with Rvs reduced joint inflammation, ameliorated arthritis symptom and severity, and stimulated chondrocyte matrix production.10-12

•    Neuroinflammation has been associated with cognitive decline.13,14 Measured in the postmortem brain tissues, lower levels of specific neuroprotectin and Rv in the brain and cerebrospinal fluid were seen in Alzheimer’s disease (AD)-related neurodegeneration.15,16
•    Levels of lipoxin and Rv, measured in the postmortem brain tissues from AD patients, were positively correlated with cognitive function as determined by Mini-Mental State Examination scores.17

Crohn’s disease and ulcerative colitis are IBD that lead to long-term and occasionally irreversible impairment of gastrointestinal structure and function.20
•    In animal models, Rvs, Mar, and 17-HDHA have been shown to help reduce tissue damage, reduce inflammation and neutrophil infiltration, maintain body weight, and increase survival.21-24